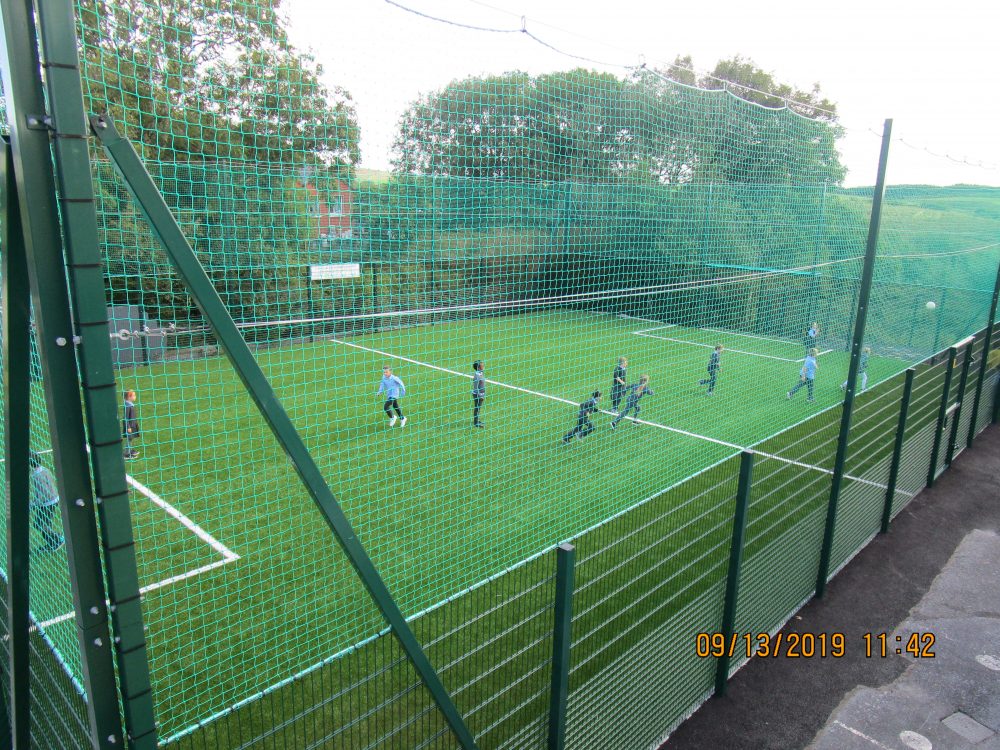 The first school on the present site was erected in 1844. The then landlord, Pierce Creagh, applied to the Commissioners of National Education for permission to build a national school in the area. He felt he boosted his chances by stating that the site was ‘near the crossroads passing through the much-frequented watering place of the Lisdoonvarna Spas’. Permission was given and the school was built without delay, much to the satisfaction of Mr. Creagh.

The 1828 and 1836 Surveys showed two ‘hedge’ schools in the area, one at Raymore (close to the Stella Maris nursing home) and the other at Ballycannoe (about 2 miles north east of the town). Samuel Lewis writing in 1837 stated that several cottages had been recently built in Lisdoonvarna for visitors and these cottages, about 60 in all, was the beginning of the town. As the town grew and became more popular the school also flourished and Mr. Creagh grew in wealth and stature.

By 1897 Lisdoonvarna had the most frequented Spas in the British Isles. Up to 20,000 visitors came mostly for the ‘season’ i.e. August and September. In the meantime other mineral waters had been found and were beneficial to all types of complaints according to eminent scientists of the time. The town grew and the National School was no longer able to cater for the young population. A new school was built in 1897 and the 20th century was heralded in the town with its brand new school. Incidentally both schools were called Rathbane as they were built in the townland of that name.

With Independence in the early 20’s Irish was introduced into the school curriculum and the school in Lisdoonvarna was divided into boys and girls schools. After the depressed 30’s and 40’s the local population began to rise again and it was felt there was need for a bigger more modern school. In 1955 the work was completed and a modern 4-teacher school with indoor toilets was built.This school which is still in use was called Scoil Einde,Lios Duin Bhearna. It is dedicated to Enda of Aran who built a church, Killeeny, in the parish, where its ruin can still be seen.

During the summer of 2002 a toilet block was built for the safety and convenience of the small children.

All mechanical and electrical work was also upgraded in the summer of 2002.

A resource room was built in 2003 alongside the Infant Classroom.  A Learning support classroom  replaced the girls cloakroom and a staffroom which is now the school office replaced the boys cloakroom.

Wheelchair accessible toilets were added to the school hall in 2006

Our toilet blocks for boys and girls were upgraded in 2017.  The 1970’s facilities were upgraded with new layouts which allowed for practical and usable changing areas within the pupils toilets.  Existing floor tiles and sanitary ware, drainage, water supply lighting and partitions were replaced.  The new facilities are fitted with low level cisterns, new electrical hand dryers and motion sensor & brightness controlled lighting.  All new hot and cold water supplies with electrical water heaters and under floor drainage with new floor traps and junctions connected to existing sewers. Finished with a non slip marmoleum floor finish with patterned cubicle doors in contrasting colours with a changing bench and coat hooks.

In June 2019, another dream was realised with the provision of an Astro-Turf playing pitch. This is a wonderful addition to the facilities in our school and we are so fortunate to have this superb all weather surface for playing.  The pitch is used on a daily basis during the school day. We are very grateful to Clár for part funding the Astro Facilities in our school.

Traditional school yard games are great fun and a good way to get for the children to get active. We have many yard markings that are colourful, child friendly and very suited to many interests. These activities using the yard markings are very helpful in developing the essential skills of agility, balance and coordination along with participating in physical activity. Children can interact in a less confined space with many of the traditional games i.e. hopscotch, snakes and ladders, an obstacle course & twister.  A new Aistear area for interactive play was also built.   Children are enjoying visiting the post office, the restaurant, the bank and also travelling around in the car and boat for imaginative fun!